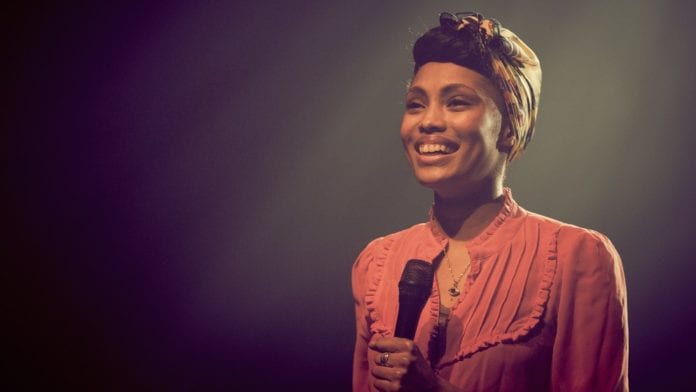 "She was born on April 5, 1979 in France in a family from the Comoro islands, Africa. She grew up in Paris and when shewas a teenager, she moved to New York"

Imany is a well – known singer all over the world. Her tone of voice is very distinctive, sensitive and emotional. When she was a child, she used to sing Whitney Houston’s songs. Imany burst onto the international music scene in 2011 with her debutalbum “The Shape Of A Broken Heart” that released the same year. The song “You Will Never Know” became a real hit.

She was born on April 5, 1979 in France in a family from the Comoro islands, Africa. She grew up in Paris and when shewas a teenager, she moved to New York. Imany was an athlete (High jump) and a model before she became a singer. Sheattended acting and singing lessons that had a great impact on revealing her talent and the capabilities of her vocal cords. She is a lovable singer all over the world and she is very popular among the Greek music fans.

Imany is touring many cities Of France at the moment but she was able to spend time doing an interview for Young People. It is our great pleasure to host an interview with her. Web Site: www.imanymusic.com

The Interview Of Imany In Young People.

How would you describe yourself as a musician?

I am learning Guitar and Piano, I cannot call myself a «Musician» yet.

Before you start your singing career, you were an athlete in highjump and a model. What condust you to music?

It’s a decision that I took, to work hard to be a singer.

What is that one thing that makes you special and unique as a performing artist?

My faith I think.

On which of your songs do you think you delivered your personal best performance so far, from an emotional and technical point of view?

I would say «The Shape of a Broken Heart».

Your stage name (Imany) means faith in Swahili. In what do you believe the most?

In lots of things, God, my family, hard work…

Your song «Takecare» is very touching. Can you tell us something about it? What in spired the song?

It’s a song half comorian (my original language) and half english. It says that you have to take care of the people you love while you can. Life is short and anything can happen anytime. Try not to have any regrets.

Some people think thatI many has it all. What don’t you have?

How important is the Internet to your development as a singer/songwriter?

As important as it is for everyone nowadays, I think. It’s essential.

Can you tell us about any new projects or ideas you will be working on in the near future?

I am currently working on my second album. The release should be around spring 2016, with a Live tour.

By having an interview with her, we had the opportunity to learn more things about her. She revealed herfuture plans and the preparations for her new album that will be released in 2016. She is now touring mainlymany cities in France. For more information visit her official website: www.imanymusic.com Interviewer, Ioanna Kariori.

“Such Pretty Forks In The Road” -Alanis Morissette.

This website uses cookies to improve your experience while you navigate through the website. Out of these, the cookies that are categorized as necessary are stored on your browser as they are essential for the working of basic functionalities of the website. We also use third-party cookies that help us analyze and understand how you use this website. These cookies will be stored in your browser only with your consent. You also have the option to opt-out of these cookies. But opting out of some of these cookies may affect your browsing experience.
Necessary Always Enabled

Any cookies that may not be particularly necessary for the website to function and is used specifically to collect user personal data via analytics, ads, other embedded contents are termed as non-necessary cookies. It is mandatory to procure user consent prior to running these cookies on your website.